A Family Of Different Souls 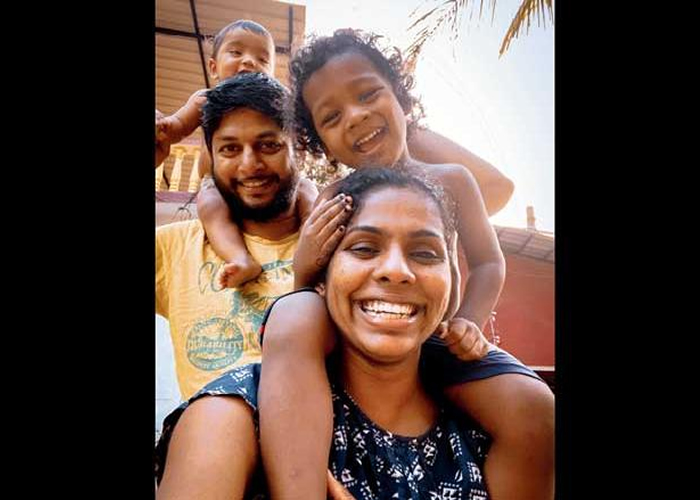 WHEN Jacob says his daily prayers, he ends it by thanking god for all the precious people in his life: Among them are his «mama and dada, sister Riley, his papa [maternal grandfather] in heaven, and his ‘other’ mama and dada,» whom he has no memory of, but has heard good things about.

He knows he once had another name, and that his adoptive parents, Sidney Cardoso and Jane D’Souza, first laid eyes on him at a children’s home in Ranchi, Jharkhand. His favourite airline is IndiGo, because that’s how he found his way to his new home in Goa and the large family of doting grandparents, loving aunties, uncles and cousins. The three-year-old has a twinkle in his eye, each time he regales family with his homecoming story. Cardoso and D’Souza wouldn’t have wanted it any other way. It’s little Jacob’s story to share.

The Goa-based couple, who turn 35 later this year, adopted Jacob in 2017. «Adoption was never a conscious decision, but it’s not like I hadn’t thought about it either. Three of my cousins are adopted, too. When I met Sidney, the conversation came up just once in passing,» says the freelance photographer.

It was only after a miscarriage, when D’Souza remembers serendipitously hearing a radio advertisement about adoption, that she and her husband seriously considered it for the first time. Thirteen months after an application to the Central Adoption Resource Authority (CARA), the nodal body for adoption of Indian children, they finally got a referral, and brought three-and-a-half-month-old Jacob home. A month after he joined the family, a second and more difficult pregnancy that started out fine, but soon had D’Souza in her «room, bed to bathroom,» led to another miscarriage. «Little did I know in my road to recovery, my feeling better was because my baby was no longer alive,» she shared in an Instagram post. Two years on, in December 2019, they welcomed four-and-a-half-month-old Riley Celine Cardoso from Madhepura, Bihar. The short answer to how they built their family is loss, says D’Souza. Theirs as well as that of their kids, who never knew their real parents.

It’s this whirlwind of a journey that led her to recently launch an Instagram live series, Different Pieces. One Love, where she shares her adoption experience with couples and single parents, who desire to do the same. D’Souza admits, she and her husband took their decision on a whim. But while being impulsive is second nature to the couple, Cardoso, an entrepreneur, says he thought this one through. «Somewhere deep down, we both knew, we wanted to do this.» The couple decided to let the rest of the family know, only after the process for adoption had begun.

As new parents, D’Souza and Cardoso learnt by trial and error. They deliberately did not follow any manual or guide-book—they were fine with making mistakes. «We knew one thing for sure, we didn’t want to hide anything from our son,» says Cardoso.

D’Souza recalls attending a sex education workshop for kids, when Jacob was a few months old, where parents were trained to broach difficult topics with kids. «We were taught how to have one-minute conversations daily on the topic, till the child hits puberty. The idea was to not bombard them with too much information, and at the same time, make them aware.» It became the way forward, when discussing Jacob’s birth parents. «We started by telling him about how we found him. And then, how we brought him home in a plane and then, in a cab. He was over a year old by then, and was able to process this information. When we started teaching him prayers, we ensured we made a mention of his parents, and asked Jacob to pray for them, too. Today, we don’t have to prompt him, he says it on his own.» Jacob is not yet curious about his biological parents, but D’Souza is aware that he soon will be, and that’s a conversation the couple is preparing themselves for.

With Different Pieces. One Love, which started on July 26, D’Souza hopes to build a community of adoptive parents in India, and help them ease through the process, which sometimes includes an endless wait for a referral, and a lot of paperwork. The first of the three-part live series, hence, focussed on the procedural aspect of adoption. She discussed adoption by Indian couples, NRI, OCI and foreign national couples and single people. For these sessions D’Souza was joined by her husband, who has studied law. «We weren’t saying anything that’s not already out there on CARA’s website. But a lot of friends and strangers would reach out to enquire about the process, and I thought maybe we could help break it down for them.» However, the real challenge was when people started asking questions that went beyond the process of adoption. For instance, how to tell the child they’re adopted. «I had my own experience, but I didn’t want to talk without research,» says D’Souza, whose next series is on the emotional aspect of adoption, especially on the adoptee. «This research changed my view 360 degrees,» she confesses. «Until before starting this show, I was of the opinion that adopted children should not be treated any differently from your biological children. But the truth is that they are different, and they should be handled differently.»

To drive this point home, D’Souza says that there is this tendency, in our society, to make the adoptive parents look like the sufferers. «There is always this fear that after the child grows up, he or she might want to go and look for their biological parent/s. People think that the adoptee should be grateful to their adoptive parents for having given them a new home and accepting them unconditionally. Nobody sees that the parents needed this child more than the child needed them. The children rarely have a say in deciding which home they go to.»

This Sunday, in the series, she will focus on the adoptee’s emotional health. «I have been listening to a lot of podcasts by adoptees, and what I realised is that many of them struggle with ‘perfection’. Most of them face abandonment issues. They grow up thinking that their biological parents left them in the cold, and don’t know why. There is hence, a lurking fear that their adoptive parents might also abandon them, if they don’t conform. While some strive to be perfect children to their parents, others struggle with it, and often put their parents to test, by turning rebellious. I had never thought of this until now.» The thought of learning and unlearning, she says is ongoing. «As parents, we need to consider what we are taking away from the child. For instance, Jacob’s parents were from Jharkhand. His origins and roots are there. So much of what makes me, is my ‘Goanness’. I’d say the same for my son. I don’t want him to be uprooted from his land and culture, either. So, while my Hindi is terrible, I hope to teach him the language that defines him,» says D’Souza. She feels that parents should never lie to their child, especially about the adoption, because that would eventually, take a toll on their relationship.

The young parents hope to make their children part of every decision. Last year, when the couple was sent a photograph of the little girl, who would soon be a member of their home, it was Jacob who they first showed it to. «He was so excited about becoming a big brother. He saw her, and was over the moon. We wanted him to accept her.» Cardoso adds, «Jane and I are mostly on the same page, when it comes to how we raise our kids, and that helps. We don’t want our children to hesitate from asking us about anything. We want them to hear it from us first. Sometimes, we nudge Jacob to ask us questions, but we don’t push him. He is still a child. For him, we are his parents, and he doesn’t know any world beyond ours.»