Adopted boy is on a mission to save old dogs who need a home: «I know how it feels not to be loved» 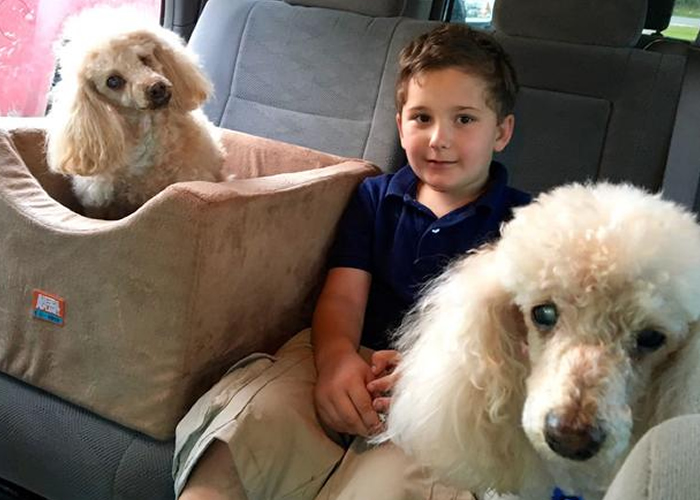 Update: In the months since CBS News reported this story, Robbie started volunteering at the humane society. This story has been updated to reflect his work.

Palm Coast, Florida — Robbie Gay loves an underdog. If you bring the 9-year-old to the Flagler County Humane Society in Palm Coast, Florida, and ask him to find a favorite, he will seek out the oldest, mangiest, least-adoptable mutt of the lot.

«There’s something about old dogs that I just like,» Robbie said.

That’s because he sees himself in them.

«He knows what it feels like not to be loved and cared for. He’s the most hopeful, optimistic, and genuinely caring kid who has absolutely no reason to be that way,» said Robbie’s adoptive mom, Maria.

She said before he entered the foster system, Robbie was a holy terror, so badly abused that he was twice hospitalized with brain injuries. Then, two years ago, Maria and her husband Charles adopted him.

He has come a long way except in this one respect: Maria said he could not cry. Despite the horrors of his past, or maybe because of them, the kid was a stone until earlier this month. One of Robbie’s old dogs, Buffy, had to be put down. He wanted to hold her until the very end and insisted his mom take pictures of the process, perhaps because he knew what was about to happen.

«He is so aware that it could have gone totally differently for him. And in these older dogs Robbie has found a place to practice compassion,» Maria said.

Someday, Robbie wants to adopt older foster children himself. But until then, to show his commitment and do what he can, he has vowed to adopt as many old dogs as his parents will allow. So far, they have six.

Recently they adopted a lame, snaggletooth shih tzu mutt named Molly, after Molly’s owner had to go into assisted living.

In the months since CBS News first reported this story, Robbie started volunteering at the humane society, where he has become a powerful advocate for older dogs. He has inspired dozens of adoptions, all to loving families — and all because a sweet little boy saw his reflection in the eyes of the suffering.