Adoption should be happily ever after 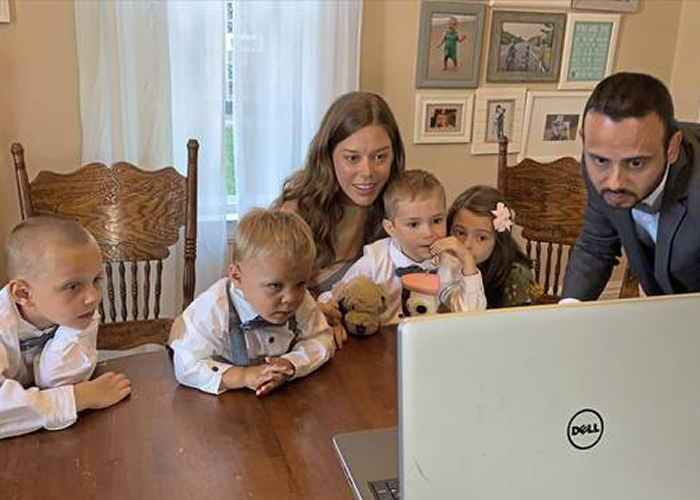 Brandan Salany (right) connects his family to a virtual adoption proceeding on Wednesday, June 24. He and Lindsay Salany adopted brothers Ryan (left), 6, and Caleb (second from left), 2. Their biological children Eli, 4, and Amelia, 6, watched the hearing on the computer.

There is more than one way to create a family.

None of them are easy.

When I was little, I had a fairy-tale understanding of adoption. A woodcarver wanted a son so he carved Pinocchio. A swan egg ended up in a nest of ducklings. These things just happen.

But then my mother’s friend finally got a much wanted baby and loved him intensely. That love didn’t end when the birth mother took him back before the adoption was finalized. For years, you could see her looking for her lost little boy in passing children’s faces.

Over the years, I have seen many emotional and inspirational stories of adoptions that built lasting, loving families. The Salany family of Irwin seem on their way to that happily ever after, as they recently had brothers Ryan, 6, and Caleb, 2, officially added to their clan via a video conference court session — a sign of the coronavirus times.

About 140,000 kids like Ryan and Caleb are adopted every year in the United States, according to Adoption Network. More than 400,000 are placed in foster care annually and have to find their way to forever homes from there. The Salany boys found their new family that way.

Not every story has that kind of happy ending.

YouTube and Instagram influencer Myka Stauffer of Dublin, Ohio, and her husband added a dark-eyed charmer they named Huxley to their family in 2017 through a Chinese adoption. For a couple of years, the little boy was part of the curated pictures Stauffer presented of her life. Then in late 2019, the pictures were just of their four biological kids. People started to ask why.

In May, she posted a YouTube video that answered that question. Huxley had autism and other medical challenges. The Stauffers opted to “rehome” him. Yes, “rehome,” like a cat that won’t stop clawing the couch or a dog that is marking its territory. They gave their son — and the law had made him theirs just as much as the two daughters and two sons she carried — away because he was too much to handle.

On Wednesday, Stauffer posted to her Instagram account again for the first time in weeks. She apologized and took responsibility. She admitted to being naive and unprepared.

“I’m sorry for letting down so many women that looked up to me as a mother,” she wrote.

She owes those fans and followers nothing. She let down her children — all five of them.

Our children, however they come to us, do not come with guarantees. We are not promised exchanges or factory warranties. We might dream of a Barbie doll princess and get a soccer-playing tornado who can’t spell to save her life. We might plan to raise a doctor and get a kid with developmental challenges that mean working a fast food job will be as hard to achieve as a Ph.D. We might want to see our grandkids and lose a child to cancer before graduation.

I hope Huxley has found a new home where he has all the love and support that he needs. But I also hope other kids — especially those in foster care or awaiting adoption — do not take his story as the kind of fairy-tale nightmare it might be, about a storybook ending snatched away before “The End.”

Our families are created through birth, but also through courtrooms and remarriage, through opening doors and opening hearts. Our kids may not come with guarantees, but it is up to us to guarantee them that they will always be ours.

Lori Falce is a Tribune-Review community engagement editor. You can contact Lori at lfalce@triblive.com.