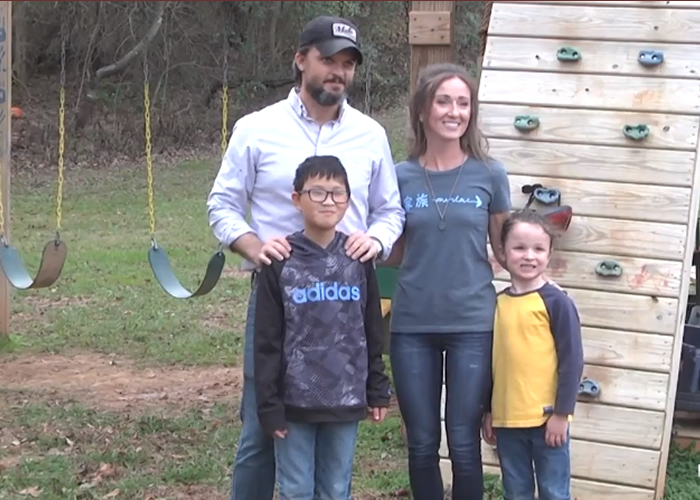 “This bleeding disorder actually brought our family together. You know it all came full circle once we found out about Trey and were able to bring him home,” said mother Monica Poynter.

Tag, 6, and Trey Poynter, 9, both have hemophilia A- a rare bleeding disorder that can cause internal bleeding at any time and is difficult to control.

The Poynters, a Bowling Green couple, had always wanted to add to their family. And when their biological son Tag was born with hemophilia, it inspired them to adopt another child with the same disease. That led them to Trey.

“His life was so different to live with hemophilia than Tag because of his circumstances. It kind of felt like we had to get involved. We had to jump in, we had to go over there and get him quickly to bring him home,” said Poynter.

The family adopted Trey right before the pandemic when he was eight years old, after being abandoned, stuck at an orphanage in China. And now Trey is more at home than ever.

“I don’t know that Trey realized that this is a condition that other people can have, and once he saw Tag being able to receive medicine and be active and not have to worry about bleeding, he had no issues adjusting to his new very active lifestyle. We brought him home in a wheelchair and as y’all can see they are jumping on trampolines, they ride their bikes, they run, they climb trees,” said Ponyter.

November is National Adoption Month. The family hopes that their story inspires other families to adopt as well.

“If anyone is thinking about adoption or you’re considering adoption, if it’s in your heart it’s been put there for a reason you know. There’s probably a child tugging on that invisible heart string. The red thread as they call it in adoption. That’s waiting for you to come and find them,” said the Poynters.

The adoption of Trey was made possible by the RAREIs Adoption Fund. You can find more information here.