Meet the amazing families who show anyone can adopt 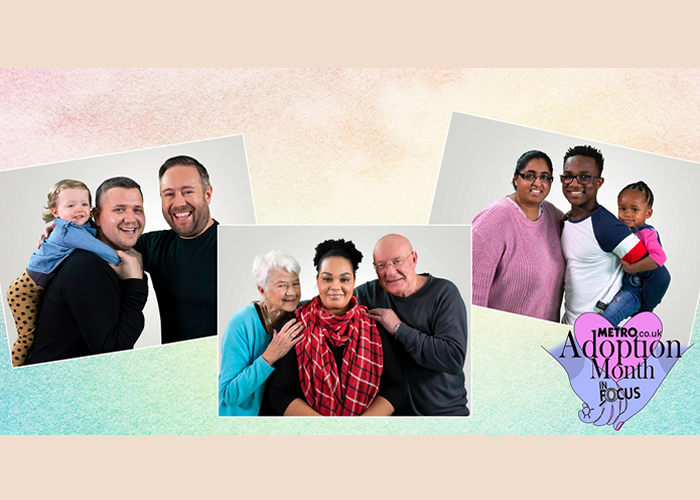 More than 3,000 children across the UK need homes right now, yet recent statistics have revealed that the number of adoptions has reduced by a third over the last four years. But with four in 10 adults saying that they would consider adoption – how has such a shortfall occurred? According to Sarah Johal, member of the National Adoption Recruitment Steering Group and Head of One Adoption West Yorkshire, not enough adults are fully exploring adoption because they don’t think they will be suitable. She said: ‘We need to address misunderstandings and outdated views to ensure that nobody is discouraged from taking the first important step towards adopting a child.

‘Some assume that because of their age or marital status they won’t be able to adopt, but that is simply not true – adoption is a choice for people who want to become a parent. ‘There is a very wide range of people who have the motivation, commitment and love to be a great parent and there are many children all over the country who are waiting for an adoptive family to improve their lives for the better. ‘People may be worried about adopting in the current climate, but there are children waiting to be adopted, and systems and support in place to ensure that assessments and preparation can be conducted safely.’ A report earlier this year revealed that almost two thirds of people didn’t feel they understood much about the adoption process, with many not even sure if they are eligible. In response, a new campaign called #YouCanAdopt was created by the National Adoption Recruitment Steering Group, which is being highlighted during National Adoption Week, which starts today.

Its aim is to bust myths around who is eligible to adopt, and explore what the process involves. On top of that, the campaign hopes to encourage people from a variety of backgrounds to consider adoption, in particular, those from BAME backgrounds, as these children traditionally wait longer to be matched with a new adoptive family. Here, Metro.co.uk speaks to three completely different and inspirational families to show how pretty much anyone, from any background, can adopt. Single parent family: Isabelle Isabelle, who is 37, is adopted herself and is now mum to a four-year-old and a 14-year-old. ‘I adopted my eldest from Uganda when he was about three,’ says the mum, who lives in the East Midlands. ‘I then adopted my youngest when she was nine months old.’

Isabelle says she first made the decision to adopt when she visited an orphanage in Uganda over a decade ago and met her now-son, Nathanial. ‘He was a complete orphan and we built a really good relationship,’ she remembers.

I just felt like I needed to be his mum.

Isabelle adds that because of her own situation she had always considered adoption – but thought it would come after she met someone and married. ‘It didn’t work out that way,’ she says, ‘It’s not always easy being a single parent but there are benefits. ‘For example, you don’t have to argue with anyone about how you’re going to parent. You can do it in the way you want to. ‘But on the other hand you don’t have someone to speak to or moan to when things get hard.’ She stresses that the most important thing when considering adoption as a single parent is to make sure you have a good support network

‘I have brilliant friends and a church family who are always there if you need them,’ says Isabelle. ‘Not just for help, but so you can have a break. ‘And during lockdown I realised just how blessed I am to have people who look out for us.’ Isabelle admits she needed her network even more when, a short time after she adopted for the second time, her daughter was found to have some health problems – leaving her facing the very real possibility that she could be a single parent to a disabled child. ‘But I would say don’t let being single put you off adoption,’ she says.

As long as you have a really strong support network who will stick by you. It will be difficult but the rewards are far greater than the negatives.

Isabelle says her daughter, now 4, is attending a mainstream school and has made a huge amount of progress, which has been ‘massively rewarding’. She adds that she feels a great deal of pride seeing how far her children have come since she first met them – a huge positive to adoption.

‘You have experiences you wouldn’t as a biological parent,’ she explains. ‘Raising both of them was difficult, but in their own way. ‘So bringing both of them to where they have got to now is incredible. It has taken a lot of work, but seeing them reach their potential is really special.’ And being adopted herself, Isabelle insists she doesn’t feel any differently because she was raised in the same way a biological child would have been. ‘I don’t see them as my adoptive family,’ she says. ‘They are just my family.’ Transracial adoption: Emma Johnson Emma Johnson, 42, is mixed race and was adopted into a white family. ‘My parents already had my elder brother, but then my mum had a few miscarriages,’ she explains. ‘They always thought they would adopt – so got me when I was just six weeks old. Mum then became pregnant with my younger sister and I became the middle child.’

Emma, who lives in Haworth in West Yorkshire, says her biological parents had her at age 17 but were unable to keep her. ‘Growing up, I was the only non-white person in both my home life and my school life,’ she remembers. ‘People ask me if I suffered racism as a child, but I honestly didn’t feel any different to anyone else.’

I felt completely loved and wasn’t treated any differently to my brother and sister – which was all down to my mum and dad.

In fact, Emma says that the biggest issue she felt she had to deal with was her hair, as there was no one she was related to, or was friends with, who knew how to style it until her family found a hairdresser specialising in black hair. ‘I only started mixing with black people when I turned 17 and met my birth parents,’ Emma says. ‘It was really difficult for me and I was teased by some, who would call me a “coconut”. It was my first real struggle fitting in with that community, and it’s still sometimes hard to this day. Even so, I wouldn’t change what has happened.’

– If you are single, married or in a long-term relationship
– Regardless of your ethnicity, gender identity, sexuality or faith
– If you are 21 years of age or older
– If you have a disability or are managing health conditions If you are employed or not, or on benefits
– Whether you already have children or not
If you can provide a safe, stable, loving home for a child, chances are you can adopt.

Emma now works with potential adopters to find the right match and works hard to make sure people aren’t put off adopting because of fears about race. ‘I think there are a lot of myths around who can adopt,’ she says. ‘I sit on adoption panels and often get asked whether it matters if the ethnicity of the parent is different to the ethnicity of the child. ‘My answer is, well, absolutely it matters. But adoption has really changed from when I was a baby – there was no training or anything like that. ‘Now people have far more support than my parents had at the time. ‘There are occasions when I have said yes to a transracial match, but I think every best effort is made to find a racial match.

The most important thing is to have a loving, stable home – sometimes it’s either that or they grow up in care, which we don’t want to see.

Emma adds, however, that she thinks transracial adoption can bring a number of positives to society. ‘Adoption very much continues to be part of my family,’ she explains. ‘My sister lives in Dubai and has adopted two little boys, and my brother has married someone who is from Pakistan. ‘I am so proud of my multicultural family.’ Same-sex parents: Andy and Craig ‘We knew our options were more limited than for others, but adoption was always at the forefront of our minds,’ says Andy, 42. He and husband, Craig, began thinking about adoption after they got married about three years ago. ‘We started discussing the options for a gay couple and it just went from there, really,’ Andy explains.

‘We didn’t understand a huge amount about adoption if I’m honest, we didn’t know anyone who had been through the process before or who had been adopted.’ Craig, who is 37, adds, ‘We knew gay couples could adopt – but that was all, really. So we went along to an information meeting. ‘Before we knew it, we were fully involved in the process.’ The couple, who live in Merseyside, said it would have taken around nine months to a year to complete the adoption, but they moved partway through the process which caused a delay. ‘I would never want to put someone off going through the process, but I have to say it was quite intense,’ admits Craig.

You get asked a lot of questions about yourself, your childhood – things you may not have considered before.

He explains the many of the questions asked are not to check whether ‘you’re a good enough parent’ – but are in place to make sure a potential child gets the best match possible. Craig also described the process as ‘more inclusive than people give it credit for’, saying no one judges you for your background or sexuality. ‘It’s because they don’t want to put a potentially vulnerable child with the wrong family and have to move them, because that might be harmful,’ explains Andy. Craig adds, ‘You have to remember it’s for the right reasons, so you are fully prepared for what’s about to happen. And it’s totally worth it in the end.’

When asked about their daughter, who they adopted at just a few months old, Craig’s eyes light up. ‘She’s a sassy, beautiful and funny toddler,’ he smiles. ‘Crazy, energetic and sometimes naughty, when she wants to be!’ Giving a small insight into what the first few weeks of adopting a child are like, Andy says, ‘The funny thing is, it was quite similar to how lockdown was. You’re asked to just spend time together and not let anybody else in for a few weeks, while you get used to being a family.’

It’s hard work of course, and it still is, but one day it just clicks. And I can’t think of anything else now.

Andy says the couple want to talk about their experiences to make adoption more widely discussed so more people become aware that it could be an option for them. ‘I just didn’t expect that there were so many children who needed a home,’ he admits. ‘If you’re even considering it, you have totally taken the first step. Going and getting more information will help put your mind at ease and help figure out if it’s right for you.’