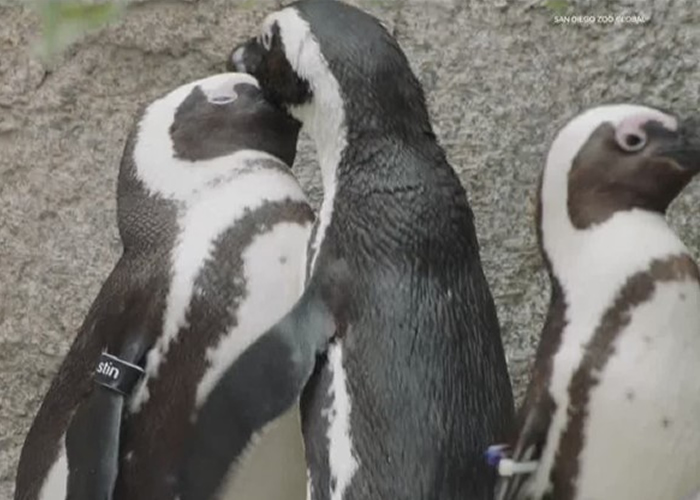 The pair’s adoption is a first for the aquarium.

Editor’s Note: The photo above is a file image. Scroll down for photos of the couple.

Something to bring a smile to your face today!

Earlier this month, a pair of female penguins welcomed a baby into their lives after adopting the egg from another couple, the Oceanogràfic València aquarium in Spain announced.

The two penguins, Electra and Viola, incubated and hatched the egg after they adopted it and will now raise the chick as their own, the aquarium said in a press release.

Of the 25 Gentoo penguins, also known as Juanito, three couples have welcomed chicks since the start of breeding season, the aquarium said.

Electra and Viola are the aquarium’s first same-sex couple to have adopted and hatched an egg, which made them an «exceptional pair.» However, the aquarium says that it’s not unusual for the birds to be in a same-sex relationship, since same-sex pairs are common in more than 450 different species of animals, happening in both zoos and nature.

Oceanogràfic València says it gave the fertilized egg from another couple to Electra and Viola after they began to build their own nest out of stones and exhibited other attitudes and actions similar to other reproducing couples.

CBS News says in 2018, two male penguins at the Sea Life Sydney Aquarium in Australia welcomed a baby of their own. Sphen and Magic — or «Sphengic,» as the duo is called — became close during breeding season and started to collect pebbles together to create a nest, much like Electra and Viola did.

The zoo gave the two male Gentoo penguins a dummy egg to take care of, and after showing aquarium staff how committed they were to their «egg,» they were given the chance to nurture a real one. Like most penguin couples, the two swapped incubating duties daily until the egg hatched.

CBS News says penguins usually lay two eggs at a time, and each egg takes 38 days to hatch. Once hatched, the chicks usually stay with their parents for 75 days before they become independent.