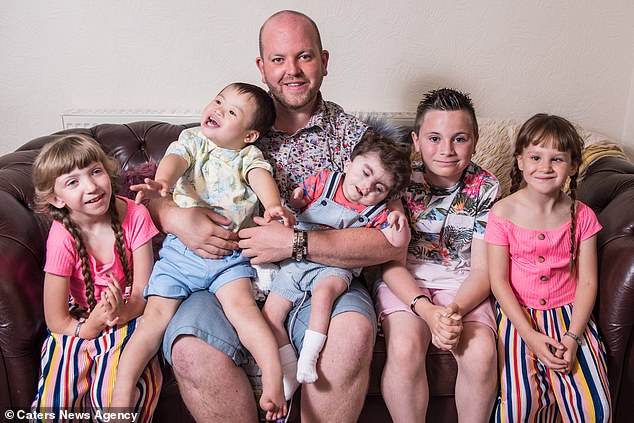 A single father of five adopted disabled children has been praised by This Morning viewers and labelled ‘inspirational’ after appearing on the ITV programme.

Ben Carpenter, 36, from Huddersfield, spoke with hosts Alison Hammond and Dermot O’Leary about the adoption process and his fundraising efforts to build a sensory room to help develop his children’s senses through special lighting, music, and objects.

Former special needs worker Ben, who is father to Jack, Ruby, Lily and Joseph – aged between two and 13 – all of whom have disabilities, was dubbed a ‘superdad’ by friends and family – and viewers were quick to agree.

However, Ben was quick to respond that he wasn’t ‘superdad’ and had always wanted to be a parent, although he initially only wanted to adopt one child when he was 21-years-old.

Ben, who sadly lost his sixth child Noah aged two in 2019, after a stomach infection led to complications, insisted ‘parenting is much more than being biologically linked to the child’.

With a range of disabilities, his children, Jack, 13, Ruby, nine, Lily, eight, Joseph, five, and Louis, two, all have complex needs, from autism to cerebral palsy.

The full-time single parent admitted that it was a long process to be accepted as a single adoptive parent when he adopted his first child aged 21.

But he said that the process is now ‘fun and swift’ as ‘new rules and regulations come into force’, adding: ‘When I started it was much longer and I had to prove myself.’

When asked how he deals with so many children on his own, Ben replied: ‘Just routine. I have constant structure and routine. I have great friends and my mother who is a wonderful support network for me.

‘They are the most wonderful children, you know people say «the children are lucky to have you» but I’m so lucky to have them. They enrich my life in every way.’

He also admitted that he’d never rule out having more children, confessing: ‘Never say never, I only ever wanted one child all those years ago and two turned into three… Fostering, maybe? Who knows what’s round the corner?’

But Ben was quick to dismiss suggestions he was a ‘superdad’, saying: ‘I’m just me. I’m not a superdad. I just love what I do. I guess what I do is extraordinary but I’m just me and anyone who knows me knows that.’

Twitter viewers were keen to praise the father and his well-behaved children following their appearance on the show via video call.

One wrote: ‘What an amazing man Ben is to have adopted five special needs children. I take my hat off to him he is a hero and whenever I feel like moaning I will just think of him.’

Another said: ‘Wow, this man on This Morning is incredible. The world needs more of him,’ while a third added: ‘Those children are lucky to have found him.’

A fourth wrote: ‘This guy is a saint and a superhero whether he believes it or not! What a guy! So much love to him and his family.’

After spending years struggling to adopt as a single, gay man, Ben became father to his eldest son Jack, who has autism and obsessive compulsive disorder (OCD), more than a decade ago.

Since then, the doting dad has spent thousands of hours caring for his severely disabled children.

Daughter Ruby has a condition called Pierre Robin syndrome, which affects the head and face as well as problems with movement in her arms.

Biological half-sister to Ruby is Lily, who is deaf, and there’s also Joseph, who needs a colostomy bag and has Down’s syndrome, as well as Louis, who has cerebral palsy and is blind.

Ben has been trying to raise funds on Just Giving for a sensory room at the family’s home to help develop his children’s sense through special lighting, music, and objects.